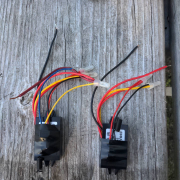 So far, this has to be the most interesting job we’ve ever done. The story has so many angles, it’s hard to decide where to begin. Because it’s sure to be a “too long didn’t read”, I’ll break it down into sections.

A very nice fellow staying across the campground from us at Buccaneer State Park in Waveland, MS, stopped by one day to ask us to have a look at his front furnace, which would not fire up. He had bought his 2006 Fleetwood motorhome from an estate and knew nothing of its past. The front furnace not firing might be related to something a little odd in plain sight.

The front air conditioner installed at the factory was a Coleman Mach configured as Zone 1 with a Zone 2 in the bedroom. It had been changed out for a Dometic at some point and a second thermostat installed for it. The thermostat was aware of the furnace, but the furnace would not activate. The owner believed the installation of the Dometic was in some way incomplete or faulty and wanted us to check it out.

A “Purple Monkey” in the NRVTA world means basically a wild goose chase. We checked out the Dometic and everything had been configured properly for it to control the front furnace. However, the relay in the AC control box that should be connected to a wiring harness to send the 12VDC activation signal to the furnace was not connected to anything at all. The Coleman harness was still there, so it looked like all that needed happen was hooking up the usual wire and we’d be all set.

One should NEVER just apply voltage to a wire in an RV without verifying the wire isn’t shorted somewhere and actually terminates where you think it does. The good news: the wire wasn’t shorted to ground and had no voltage on it. The bad news: it also didn’t terminate anywhere near the furnace. A tone generator was able to “hear” the wire to somewhere near the edge of the roof, but then it just disappeared. We decided to trace it from the furnace up when we found the REAL problem.

The furnace connection on this Atwood is a 6 pole plug which SHOULD have four wires on it: all 12VDC, positive house power, chassis ground (aka negative), power out to the AC control box, and a line in from AC control box. The wire coming back from the AC control box, which normally activates the furnace with 12VDC, was MISSING. We pealed back the vibration shielding on the umbilical to the slide out where the furnace was mounted and it wasn’t there either! Apparently, the factory forgot to include the wire in the lower section of the harness altogether.

We went outside and scoped the exhaust port, and sure enough, this furnace had NEVER been hot. It was basically brand new at 15 years old.

No Way It’s Worth It

Running a new wire inside a fully built coach is a nightmare. If it can be done at all, it takes a lot of time (hence expense) to do it. This job would’ve definitely been on the long side because it’s pretty much three separate jobs to get the wire from the roof to the wall, from the top of the wall to the bottom of the wall, and then out into the slide out. Just making it right would’ve cost hundreds (if not thousands). It was time to think outside the box.

What Are My Options?

I’d been cruising Facebook a few days before and just happened to get offered an Amazon ad for a pair of chips that use a 433MHz encrypted radio signal to activate something via a relay. The transmitter side of it is basically the guts of a key fob for power door looks. The receive side just knows how to open a small digital relay. This was the perfect time to go mad scientist!

We paired the little chips with voltage regulators to bring the house 12VDC power down to a friendly and consistent 9VDC. This step might have been unnecessary because the chip claimed its maximum voltage was 12. We know the alternator on a motorhome produces 14VDC and if the owner ever installed LiFePO4 batteries, they need 14.4V to balance the cells. We thought it best to spend the extra ten bucks on some cheap insurance and use regulators.

The remote control chip was powered up by running house 12VDC into one side of the AC control box heater relay. The other side of that relay powered the regulator which powered the chip and activated the radio signal.

It seems after all that, the conclusion should be more exciting, but it simply worked. The total cost of the project was around $150 including parts and our time to find and test the setup, a figure that was well worth it to the owner and vastly less than any other route to a solution.

We really enjoyed this project because the nerd factor was 11 out of 10. There are a few takeaways in retrospect:

After writing up our website, we read the whole thing and realized it was missing something: the flavor of who we are and how much we love what we do.

Probably a reflection of happy childhood memories, we are absolutely passionate about camping, fellow campers, and the gear we all use to make it happen. We travel almost full time and sometimes we go to spectacular places like Glacier National Park. Those places are awe inspiring wonders, but they’re not enough to make full time RVing worth it.

If we are in a campground with you, you’ll see us out walking around any day weather permits. For us, the bigger splendor is in the people enjoying themselves and the vast array of rigs and campsite setups we see. It’s exciting to see classics still serving their owners, the latest and greatest straight off the dealer lot, rigs designed for a family with half a dozen kids, coaches built for two, and even the latest tent designs. Every single campsite is a little world of wonder to us as we walk by and often stop to visit.

The reason we travel so much isn’t the spectacular sights or even the geeking out on the vast array of RVs and camping toys. It’s the people we get to meet from all over the country and sometimes, all over the world. Everyone who camps seems to have some personality traits in common, each person expressing those traits in their own unique ways reflecting their own unique experiences and values. Learning about the people we meet and how their world is put together is the thing that keeps us out here on the road so much.

The vast majority of people we meet are:

It’s easy to see why these traits are common on the road. It takes all of that to get the most out of camping.

These traits are also why the best part for us is… you! 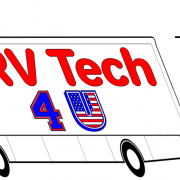 Today was a big day. For months we’ve wanted to break from the daily flood of work and recovery to lay down our little patch of Internet homestead by completing our website. Finally, after months with only a heartfelt letter to our visitors serving as more than a “Coming Soon” page but less than a website, Round Two is complete!

It was probably good fortune that made it take so long because when we formed this venture, we knew we’d need a website, but the correct contents of that site did not turn out to be anything we would’ve thought of at the onset. What has been compiled here in this release is basically the answers we give to the passersby who see the sign in the windshield and stop in to ask for help or just have a chat about what we do and what it’s like to do it the way we do.

As I sit here taking my personal victory lap for finishing things up, I can’t count the times we’ve told visitors and customers how to find repair techs when we’re not around. Almost as often, we’ve recommended products or told someone where to buy a part we don’t carry with us. Of course, people want to know what we can do and what our backstory is, but our biggest fear is that one of these awesome people would someday want to talk to us and not remember how to do it.

Finally, as the situations have unfolded, we’ve met amazing people with interesting challenges worth having on record. That’s what this From the Field journal is about. It’s kind of for us, but it’s also for those who might want to get more in touch with who we are and how we do things. We hope you like it.

This site uses cookies. By continuing to browse the site, you are agreeing to our use of cookies. Cookies are used by this site only to provide a good browsing experience.

We may request cookies to be set on your device. We use cookies to let us know when you visit our websites, how you interact with us, to enrich your user experience, and to customize your relationship with our website.

Click on the different category headings to find out more. You can also change some of your preferences. Note that blocking some types of cookies may impact your experience on our websites and the services we are able to offer.

These cookies are strictly necessary to provide you with services available through our website and to use some of its features.

Because these cookies are strictly necessary to deliver the website, refuseing them will have impact how our site functions. You always can block or delete cookies by changing your browser settings and force blocking all cookies on this website. But this will always prompt you to accept/refuse cookies when revisiting our site.

We fully respect if you want to refuse cookies but to avoid asking you again and again kindly allow us to store a cookie for that. You are free to opt out any time or opt in for other cookies to get a better experience. If you refuse cookies we will remove all set cookies in our domain.

We provide you with a list of stored cookies on your computer in our domain so you can check what we stored. Due to security reasons we are not able to show or modify cookies from other domains. You can check these in your browser security settings.

We also use different external services like Google Webfonts, Google Maps, and external Video providers. Since these providers may collect personal data like your IP address we allow you to block them here. Please be aware that this might heavily reduce the functionality and appearance of our site. Changes will take effect once you reload the page.