From the Field
You are here: Home1 / From the Field2 / Uncategorized3 / Q: Dicor Is a Sealant, Right? A: No, Not in the Context of an RV.

We did a lot of roof jobs this summer. We used many tubes of Dicor 501. But why? What is the Dicor supposed to be doing? Most people, even RV repair techs, think of Dicor 501 Self-Leveling LAP Sealant as a… wait for it… sealant. It says so right on the label, right? So, what is this stuff, really, and why is it drizzled all over your camper’s roof?

For brevity, I’m going to call “Dicor 501 Self-Leveling LAP Sealant”, as well as its non-sag version, just plain “Dicor”. Be aware, however Dicor is a brand that has many other products in 10.5-oz calk gun tubes. Most of them have the same thing in common: They are heavy in solvents. Solvents evaporate very quickly at first, causing the substance to “set up”. The evaporation of the solvent slows more and more, but never actually stops until it’s all gone. This is why fresh Dicor is like puffy bubble gum, but old Dicor is chalky, cracked, and flakes away easily.

What happens if you try to seal something with a chalky, cracking substance? Of course, it leaks. But here’s the interesting thing: The Dicor on an RV roof isn’t actually sealing anything (if the manufacturer was doing their job). Under the Dicor, wherever you find it, there is an actual sealant. Sometimes it’s a waterproof adhesive, sometimes it’s butyl (like window putty), sometimes it’s a flexible adhesive like Lexel, sometimes it’s a Sikaflex product (read up on those on your own), and sometimes it’s even plain old silicon.

A BREAK FOR A SERIOUS WARNING: DO NOT EVER, E.V.E.R. put silicon on an RV unless it was already there from the manufacturer. Nothing will ever stick to that spot again except silicon without stripping the material completely. In most cases, that means destroying a piece of your camper to undo the mistake! Ok, back to our program….

If it’s not sealing things, then what is the Dicor doing up there slathered all over everything in sight? It is actually acting as flashing, the term for anything that redirects water away from water sensitive areas. The reason for flashing is not to create a seal, but to protect one from water.

Water is one of the most destructive substances on Earth. It sounds weird but think about the Grand Canyon for a minute. Water is abrasive, acting as more or less super-fine-grit sandpaper in flowing liquid form. Water is chemically active, aiding in all sorts of oxidative processes like rust. Water has a tendency to rehydrate any sort of water-based adhesive over time making it no longer adhesive. And most dramatically, water expands when it freezes. This last point has led to the absolute obliteration of many campers (including one of our own) when a roof leak sprang in storage over the winter and water made it into the wood. The water literally explodes the wood fibers away from each other as it freezes and expands destroying the structural integrity of the wood.

Taking all this information in and jiggling some thought with it, it’s pretty easy to arrive at a conclusion about water leaks on a camper: If the leak has happened, it’s not just because the Dicor failed, but also because the REAL seal under it failed too. This means to reliably stop the leak, it’s not just about replacing the Dicor, but also about repairing the broken seal under the Dicor. Otherwise, it’s only a matter of the solvent evaporating before the leak returns. Sometimes, especially on older campers with severe damage, this kind of repair is the best because it is the most cost effective, but it’s never permanent. Doing this kind of “repair” on a newer camper is just sealing the fate (see what I did there?) of the camper.

Having said all that, the first line of defense is the flashing. In many ways, keeping that flashing viable is the single most important thing to keeping your camper from literally falling apart. An inspection schedule of at least twice a year is needed just about everywhere in the world for different combinations of environmental factors (e.g. sun, freezing, etc).

Almost all campers also have a generous supply of exposed sealant. Most campers have many seams which are sealed with silicone or silicone-like substances like Lexel. If you touch up one of those surfaces, make sure you know which it is and heed my warning above about silicone. Because a camper goes through an earthquake and a hurricane every time it moves, we inspect our own as part of the setup process when we arrive and, if we’ve seen freezing, heavy weather, or been stationary for more than a couple weeks, we inspect it again before we leave. We highly recommend you do the same. It’s all about keeping the rain in the outdoors!

Stay safe out there!

Want to join the discussion?
Feel free to contribute! 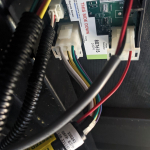 Oh NO! It Wasn’t the Board! Except, It WAS the Board. LOL
Scroll to top