From the Field
You are here: Home1 / From the Field2 / Uncategorized3 / Oh NO! It Wasn’t the Board! Except, It WAS the Board. LOL

In yet another episode of Adventures with the Purple Monkey, we once again explore what happens when you expect an outcome, but you don’t get it.

First, we’ll set the stage. We were called out to a private residence where a fifth wheel was “stuck” in the owner’s yard, they believed due to locked up brakes. Upon arrival we observed the recent generous rains had allowed the wheels of the camper to sink into the ground several inches. The wheels on the camper did not turn as the truck had managed to pull it a few feet, but instead plowed up the ground, pushing the displaced sod and dirt in front of the wheels and leaving them in quite a hole. The owner did the smart thing and got an expert involved when faced with this unfamiliar situation. Just hooking a tractor to the truck and pulling could’ve caused serious damage to the suspension (at the very least).

The way we fixed the situation will generate some hate, but we used the rear jacks to lift the wheels out of the holes. This was a safe option because several requirements for this kind of move were met (the throw required to clear the ground was short, the jacks weren’t sinking on blocks to spread the pressure, the jacks were oversized for the camper, etc). You shouldn’t try this move yourself without knowing exactly how the jacks can be damaged and avoiding it. Also, you definitely don’t want to create a situation where the camper could bend a jack and fall on something or someone. That’s a life safety warning to be taken seriously.

Once the wheels were up, the first order of business was confirming our suspicion that the brakes were not locked up. To the owner’s complete amazement, they spun freely. If you’ve never tried to pull a heavy camper on wet ground, be prepared for this effect. With several thousand pounds resting on the wheel bearings, they don’t turn as easily as they do when suspended. When on slick wet grass, sand, or mud, if the friction between the ground and the tire is less than the friction at the wheel bearing, the wheel just drags along. We’ve seen it on our own fifth wheels many times.

Next was to get this camper out of the yard and onto the driveway. To do this, we simply used lumber under the wheels to get them up out of the holes and provide a ramp for them to travel past the troubled spot. Note that none of this would’ve worked if the ground were still saturated (it was now several days after the owner’s initial attempt) without building a little road under each wheel track all the way to solid ground.

After we got the camper onto the driveway, the next phase of the operation started. The owner disconnected the truck from the camper and showed us the second complaint: auto-level failed. The hydraulic motor ran for a while, but nothing at all moved. The starting position was from hitch level with nose high, so the first phase of auto-level to drop the nose wasn’t working. Here’s where things got a little weird. The owner then reported that manual mode didn’t work on the outside control panel, so we went to the inside panel. We knew there wasn’t a problem with the hydraulic valves because we’d used every single jack to get the camper hitched and pulled out of the hole. We experimented with manual mode and discovered the zero point was good and the camper could be leveled manually. I called LCI for confirmation and they agreed: It had to be the control board. The smoking gun was the outside control panel not working.

This was an aftermarket warrantee job, so we had to get approval for the replacement of the controller, which wasn’t cheap. LCI didn’t mention to us the model of controller we were replacing was deprecated in favor of a new one. We got approval and order the updated version. When it arrived and we installed it, we found the second thing LCI didn’t tell us: Upgrading the leveling controller to the new version meant needing to upgrade the touch screen interface to the new version as well! This was very annoying to us, but much more annoying to the warrantee company. After verifying our reason for adding an extra $1000 to the repair quote, they approved it. We had waived the second trip fee, which was not covered under warrantee, but now a third trip was required that was really LCI’s fault. We didn’t think it was right to charge the customer, so that’s two trip charges unpaid if you’re keeping track.

What happened next was just what happens when you’ve already had too much of a situation and just want it to be over. If we’d gone out there like it were any other day on the job, it would’ve gone differently because we would’ve had our critical eyes on everything and not the blinders of “let’s get this over with”. We installed the new display and it finally saw the new leveling controller. But, to our complete dismay, when attempting to auto-level, the hydraulic pump would run for a while and the attempt to level would fail! W.T.H?! We reset the zero point and tried again. FAIL! Were we finding, after three trips and a couple thousand dollars in parts it wasn’t a problem with the board and we missed the real problem?! This was turning into a nightmare fast.

We called LCI tech support (which is quite good, BTW) and they walked us through trouble shooting. To our complete embarrassment, they solved the problem by simply forcing us to notice the camper didn’t have enough room to do the required 3 inch below level nose drop that starts the whole leveling process because the owner had put Anderson cans under the landing gear. Then the lightbulb went off that the behavior was indeed NOT the same. Originally, the gear didn’t move at all and there was plenty of room for a nose dip if it had. With the new controller, the nose dipped, but stopped when the gear couldn’t go any further. To confirm, we hitched to the truck, removed the cans, and BOOM! It worked. Of course. The outside control panel now also worked.

If you’ve read many of our blog entries, you might see a pattern with the Purple Monkey episodes. It’s never that there is some mysterious force working against the situation. It’s always that something hasn’t been seen, or worse, has been seen, but has been ignored.

The lesson remains the same: Be careful what you expect because it doesn’t really mean much compared to what is real.

(NOTE: To be absolutely clear, no customer is ever asked to pay for the time it takes us to sort out our own learning experiences. We always look at how long a job should take much more than how long it actually took.)

Want to join the discussion?
Feel free to contribute! 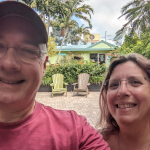 A Quick Note After Vacation
Scroll to top